You are here: / Kayaks and Boats / Batteries & Charger
My Account Customer who bought this product also bought: 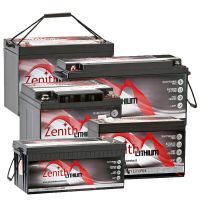 [+] Zoom through an enlarged version of the image
High power and secure battery with up to 60% weights savings towards a comparable AGM battery.

LiFePO4 accumulators are a advancement of the known lithium ion accumulators. They provide higher discharge currents and don't deposit lithium or release oxygen when overcharging. Therefore even an overheating caused by a chemical reaction isn't possible. Although these batteries are maintenance-free, there are a few things to follow to preserve the unique average charge cycle stability of about 2500 charging processes.

For lithium batteries the nominal values of the amperes are calculated with a 1-hour extraction period, that means a battery specified as 60 Ah can be charged for 1 hour with 60 ampere removal. For conventional Lead/Acid or AGM/Gel batteries, this information is based on a 20h loading period. In order to drive 2 hours with ,for example, a Minn Kota Endura 30 electric outboard with 30 Ah power consumption, you need at least one 80-90 Ah AGM battery. In comparison, a 60 Ah lithium battery suffices for the same journey time.

Another extremely big advantage of lithium batteries is the low weight. Based on the example above, a 60 Ah lithium battery weighs 9.3kg, an 80-90 Ah AGM battery about 25kg. The weight saving is therefore about 60%!

As with the current drain, lithium batteries can be charged with a charging current that corresponds to the full nominal value - i.e. a 60 Ah battery with a charging current of up to 60 Ah. Thus, this battery is fully charged in one hour. This is very useful in applications where a quick charge is needed. However, we point out that the cycle life suffers. We also recommend using only our Zenith chargers for lithium batteries. Only then the expected cycle stability and, if applicable, guarantee is fully guaranteed. The Zenith lithium batteries are equipped with an internal electronic system, which protects the battery from deep discharge by an automatic shutdown function.

In addition to the low weight and the possible high current flows, the durability or cycle life is the most important criterion for a lithium battery, so that despite the high price, a charging cycle is far cheaper than with conventional consumer batteries. The Zenith LiFePO4 accumulators are based on an average cycle life of 2500 units. This means when it reaches 2500 cycles, the performance of the battery is still over 75%! The following guidelines are given at an average temperature of 25°C: ATTENTION: A series circuit of e.g. two 12 V Zenith lithium batteries on 24 V is not possible , as these batteries are equipped with internal electronics! This electronic is designed for the nominal voltage of the battery! A parallel connection of two identical batteries, i.e. to double the capacity while maintaining the same voltage, is possible, taking into account a suitable charger.

Zenith Lithium battery LiFePO4
Art.No.: Zen-LiFe-9011XX  in stock
High power and secure battery with up to 60% weights savings towards a comparable AGM battery.
more Info
Product 3 / 12
Back to Overview
« Previous Product | Next Product »