You are here: / Fishing Rods
My Account Customer who bought this product also bought: 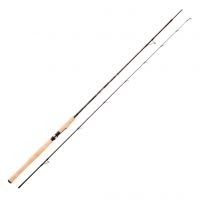 This series began a new era in the spin fishing sector back in 2006. JENZI launched out on new waters for example with the exclusive VLRC-special guides. In comparison with other rods with conventional guides, these rods make it possible to cast up to 30% further! In addition the MITSUKI rod is exclusively built with high modular FSP-Carbon blank. This is what makes the MITSUKI spin rod "fast-sensitive-powerful".

Jenzi engineers persisted in further improving THE most successful rod series ever. Such accurate and long casts have not previously been possible! When casting conventional rods with standard guides, the line can often wildly rotate between the individual guides. The MITSUKI rod with VLRC – "Very Long Range Casting" guides shoots the line perfectly straight towards its goal. The secret to its success is one the one side due to the small inside diameter and the special inserts in the guides themselves. Secondly the special spacing as well as the number of the guides reduces friction to a minimum. For example, a MITSUKI Soft Bait MH with a length of 2,70 m is constructed with a "9 + 1" set of guides, meaning 9 guides and a darting guide which is 3-4 guides more than a standard spinning rod with the usual "5 + 1" or "6 + 1" set of guides. More guides – more distance! Hard to believe, but true! As a matter of fact, the MITSUKI spin rod casts up to 30% farther. Out there where the big ones are waiting – out there where scarcely no one else is fishing!