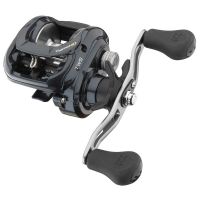 [+] Zoom through an enlarged version of the image
Good equipped baitcasting reel with an unbeatable price-performance ratio.

With the Tatula baitcast reel Daiwa further continues the development of the T-Wing system (TWS). The TWS thereby increases the casting performance compared to conventional baitcast reels about up to 10%. This is due to the reduced line friction during the cast, since the line exits the reel at a considerable larger angle, which causes less friction. At retrieving, the T-construction is folded into the reel body and the line is guided over the conventional levelwind system. This new generation of the T-Wing system caused huge sensations among the scene at its introduction in the USA. Additionally the spool of the Tatula runs extremely smooth and enables great casting distances. Also the further equipment is extraordinary for a baitcast reel within this price segment and convinces with many more elucidated details  focusing on the new Air Rotation system, where the gear is hardly noticeable at retrieving the bait.